A review of "The Age of Empathy" 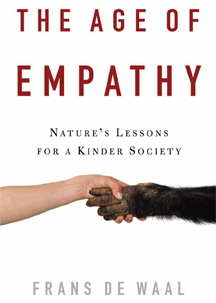 Last night I finished reading The Age of Empathy by Frans de Waal. The book is an evolutionary examination of empathy, which de Waal finds examples of in many animals as well as humans. He breaks apart the idea that only humans feel emotions, of which empathy is one. He also argues that humans are not only linked to animals through our "negative" traits (violence, competition, etc) but also through our "nobler" traits (empathy, consolation, fairness).

To be honest, I think it's really a no-brainer to see that animals have emotions and share commonalities with humans. Humans add some complexity to these traits, but working together, communication, or politics appear in other animals as well. Really, anyone who lives with animals and tries to see them for what they are begins to see this. Being open to what animals can communicate to us helps us understand them better.

There's this idea that science teaches that animals are not like us at all, that they do not have emotions like us. de Waal attempts to turn this idea around and show that emotions have evolved through a long process, a process which began millions of years ago and well before even primates existed. To read a book by an eminent scientist talking about the emotional lives of animals is delightful, even if only because it confirms my own ideas about animals.

de Waal's comfortable and straightforward style, combined with stories, both anecdotal and drawn from his research, make the book a pleasurable read. He explains evolutionary theory in such a way that even I can sort of understand it, and he made me aware of some parts of the theory that I hadn't previously known about.

For instance, I learned that there are 2 messages of evolutionary theory. The first is "that all plants and animals, including ourselves, are the product of a single process." This is basically what I was taught in school. The second, though, is more controversial: "We are continuous with all other life forms, not only in body but also in mind." This doesn't mean that there is some transcendent connection between all life, but rather that evolution pertains to physical characteristics as well as mental or psychological. Our brains have evolved along with our bodies, and many of the mental characteristics that we like to think are unique to humans really have their roots in a much earlier evolutionary period.

For the Darwinist, there is nothing more logical than the assumption of emotional continuity. Ultimately, I believe that the reluctance to talk about animal emotions has less to do with science than religion. And not just any religion, but particularly religions that arose in total isolation form animals that look like us.... Only the Judeo-Christian religions place humans on a pedestal, making them the only species with a soul.

When it comes to characteristics we don't like about ourselves, continuity is rarely an issue. As soon as people kill, abandon, rape, or otherwise mistreat one another we are quick to blame it on our genes. Warfare and aggression are widely recognized as biological traits, and no one thinks twice about pointing at ants or chimps for parallels. It's one with regard to noble characteristics that continuity is an issue, and empathy is a case in point.

He ends the book with a call to us all to build on our empathic nature: "To call upon this inborn capacity can only be to any society's advantage." I completely agree, but I would draw it out even further with a wish to extend our empathy to other animals. We are similar in many ways, and we should be very able to empathize with even animals that are quite unlike us.

This brings me to think about how humans relate to animals. I think that whether we like it or not, whether we realize it or not, we know at a deep level that animals are like us and feel similarly in many ways. People who kill or mistreat animals, even if they don't realize that this is the case, suffer psychological stress - or else are deeply psychopathic. Psychopathic people are not affected by the suffering of others – they are completely lacking in empathy.

I think that our empathy for animals (and our empathy for other humans as well in many cases) is repressed, but it does still affect us. There have been books written about the links between abuse of animals and spousal abuse later in life, and quite likely animal abuse leads to other violent acts. I don't mean that violence towards animals is simply an indicator of violent tendencies, but rather that we know, at a prehensile level, that animals suffer like we do.

Most of the time most people don't do anything that directly harms animals. But as a society we harm billions of animals every year. It's reasonable to expect that we feel this harm on a deep level, a level that none of us will acknowledge.

At some point I'll try to clarify my thoughts on this, but for now I'd just like to suggest that you pick up a copy of this book and read it. It is an excellent introduction to the blossoming field of study of animal emotions. It provides useful evidence and background for any arguments against charges of "anthropomorphism" which are really so much bunk in the face of real science.